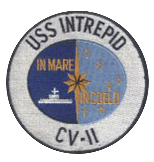 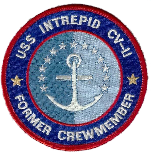 Thanks for nice response, though not carefree on active duty maneuvers during those younger days. I spent a couple of hours yesterday looking at pics on my computer from my lost '56 Med Cruise book, among them then Capt. Wilson leading his Intrepid Marines on the wedding day of Grace Kelly and Prince Rainier in Monaco (below), and more. I did some of the cartoons in the cruise book (also below).

I've attached a second photo of me on Intrepid hangar deck, starboard elevator, with Northampton in background.  I had a brief stint as Air Intelligence officer, took AI course in Norfolk, thus had photo division, till a proper 1355 came aboard, and as an 1105, it was back to Communications as Radio Officer till transferred. When my transfer order came Captain Massie had exec CDR Rafael Semmes draft a strongly worded complaint for BuPers, which mindlessly I sent out without making a clean copy for Semmes to review. Of course, confined to quarters for a week, dining alone in back of wardroom. No acey-deucy.

You may share this with our FCM if you wish.